Season 1 of Squid game which had some Dark comedy is going to be back with another season. Shooting of Squid game season 2 is in work and it may soon release in 4th quarter 2023 or 1st quarter of 2024.

First Season of Squid received a fabulous response from fans worldwide. Some said that the series was just overhyped whereas many loved the Dark Comedy series. Hwang Dong-Hyuk writer, director, producer, and creator of Squid game has a special message for fans.

IT took 12 years to bring the first season of Squid Games to life last year. But it took 12 days for Squid game to become most loved series of Netflix ever.

A huge shout out for fans around the world for loving our show..

The man in the suit with ddakji might be back.

Squid Game is officially coming back for Season 2! pic.twitter.com/4usO2Zld39

The announcement was made on 12th of June 2022 and is now trending in 28th position of twitter trend page. 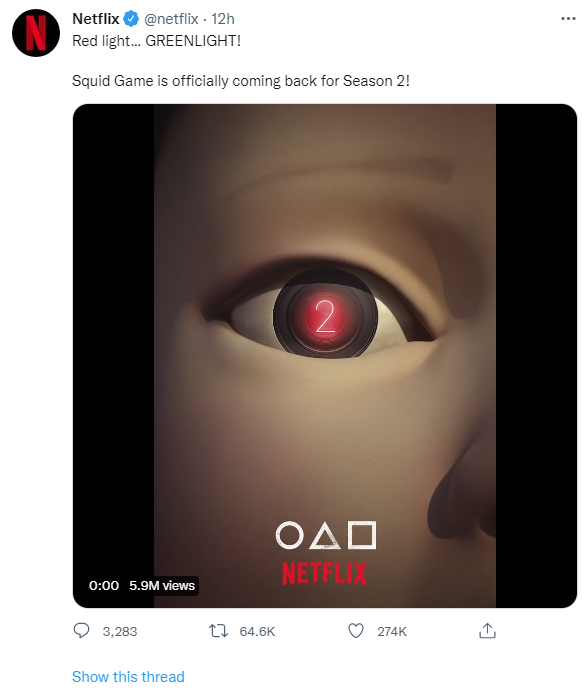 How many episodes will be there in season Squid game season 2?

As of now there are no official news about new cast and list of episodes, But first season had 9 episodes which had at least 55 minutes of run time per episode. Assuming Season 2 might also have 8 to 9 episodes.

If you haven’t watched the first season of Squid game you can watch it here. Season 1 of squid games has 9 episodes.

That was all about the Squid game 2, If you found this post helpful do share and follow BlogsBarrel by pressing the green icon below it will update you about new posts.

Images used in the article are for reference purpose, BlogsBarrel doesn’t claim any rights to them.

Source for the article